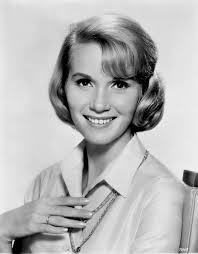 celebrate our nation’s independence, I would like to take a moment to wish a happy  birthday to the amazing Eva Marie Saint.  Eva Marie was “born on the 4th of July” in the year 1924.    She had a variety of acting roles on television, beginning in the late 1940’s.  Her first film role was in Elia Kazan’s 1954 classic On The Waterfront.   Her performance in this movie is superb.  Her  character, Edie Doyle, is the only significant female role in the movie, and she was surrounded by  several male actors, all of whom were a sheer powerhouse of performance.   Eva Marie does not just  hold her own with Marlon Brando, Karl Malden, Rod Steiger, and Lee J. Cobb; she stands out.

It is hard to believe she was 30 when On The Waterfront was released, for she looks closer to 19.  Her  beauty could best be described as angelic, or otherworldly, which was precisely what the role called  for.  Edie Doyle was not only angelic physically, but morally as well.  Her meekness, her restraint, her  modesty represent the moral center of this amazing film.  Eva Marie won the Oscar for Best  Supporting Actress, one of eight Academy Awards bestowed on this American classic.

Eva Marie Saint only made one film with Alfred Hitchcock, and it just happens to be one of his best films, and a film that routinely ranks on “all time best” movie lists.  That movie is North by Northwest.   Eva Marie gives one of the strongest female performances in the entire Hitchcock canon.  Once again, she is a woman surrounded by men, who all desire her for different reasons.   The government wishes for her to fulfill her duty.  James Mason’s character also has a role for her to play.  And Cary Grant’s character is in love with her, but also using her to achieve his goal.  Eva Marie is brilliant from her first appearance on screen, and gets to show off her range.  Of course she is incredibly attractive, and her opening banter with Carey Grant has more than its share of sexual innuendo. 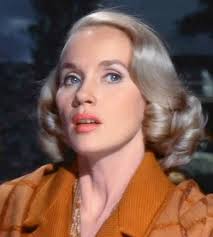 Both James Mason and Cary Grant believe they are using Eva Marie Saint; meanwhile, she is in complete control of the situation, and of them.  What her character didn’t plan on, of course, was falling in love with Cary Grant.    When Grant’s and Mason’s characters confront each other in the auction gallery, as Eva Marie sits forlornly in the chair, as if she is another piece to be sold to the highest bidder, her emotional turmoil is palpable.  She is smart, sexy, strong, a model of femininity;  the quintessential Hitchcock heroine.   She is also an ultra-modern woman, certainly by the standards of 1959, when the movie was released.

If On the Waterfront and North by Northwest were the only two films she ever made, her place in film history would be secured.   But of course she has continued to act, and act well.   She was good in the cold war comedy The Russians Are Coming, The Russians Are Coming.  She was memorably sweet and touching as Tom Hanks’ mother in the underrated Nothing In Common.   She was surprisingly well cast as Martha Kent in the 2006 Superman reboot Superman Returns.  And she continues to act to this day;  she can be seen in the 2014 film Winter’s Tale, starring Colin Farrell. So here is wishing a very happy 90th Birthday to a wonderful woman.  Thank you Eva Marie Saint, for all of the memorable performances.  May you have many more happy and healthy years.