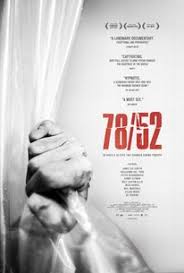 There have been plenty of documentaries made about particular film directors, and particular films.  This may be the first documentary inspired by one scene from one movie.    Granted, it is an iconic scene.  (The title is based on the 78 different camera set ups and the 52 editorial cuts in Psycho‘s shower scene).  I first saw Psycho on television in the early 80’s, by which time the horror “new wave” was in full swing.  Little did I know how significant was Hitchcock’s film.

This film, like many documentaries, is a series of “talking head” shots, of dozens of people in the film industry, talking about the importance of Psycho in general, and the shower scene in particular.   There is a good balance between historical information (the nuts and bolts of how the scene was shot) as well as more abstract discussion about the meaning and influence of the scene.

Director Alexandre O. Philippe is a long-time documentarian, whose best known work is The People vs. George Lucas, which examined the often contentious post-prequel relationship between the creator of the Star Wars universe and his fans.  Whereas the George Lucas film was seen by many as overly critical of its namesake, this new documentary is more complementary to Alfred Hitchcock.  This is a film that could only have been made by a fan;  who else but a die-hard fan would stab casaba melons with a knife in an attempt to recreate the foley sounds Hitchcock had created to represent the stabs of the knife in the shower scene?

Director Philippe does make a couple of artistic choices that detract from the overall appeal of the film, in my opinion.  First of all, the movie opens with some re-created shots; scenes attempting to mirror similar scenes from Psycho.  So we get to see some girl, who is not Janet Leigh, driving a car in the rain, with camera set-ups similar to those used by Hitchcock.   These shots are unnecessary.

He also made the decision to shoot the movie in black and white.   I have seen at least one review dismiss this as pretension.  Since Psycho was in black and white, perhaps it makes some artistic sense, because we will be viewing clips and still images from the earlier film frequently?  Except, we also see color clips (several of them) from other movies, which breaks the artistic framework established by black and white.  Ultimately, I don’t think it really makes any difference.  I would probably feel exactly the same way about this movie were it shot in color.

There are an awful lot of images of people watching the shower scene, and reacting to it.  This is similar to the many youtube videos which show peoples’ reaction shots, without seeing what they are reacting too.  While it might be cool for two seconds to watch Elijah Wood going “Oh my God!” as he watches the shower scene, this particular contrivance gets old quickly.

For any fan of Hitchcock, though, there is much to enjoy here. We get to hear  Guillermo del Toro talk about Hitchcock “breaking the covenant” between director and audience by killing off the female protagonist a half hour in to the movie.  We hear the brilliant film editor Walter Murch discussing the editorial choices made in the scene.  We hear Danny Elfman talk about how much he was influenced by the musical score of Bernard Herrmann.    These scenes form the meat of the movie, and are the most appealing to watch.

If you are interested in learning about how this groundbreaking, game-changing scene was made, and the impact it had, then this movie is well worth 90 minutes of your time.  The blu ray also includes bonus interview footage of both Walter Murch and Guillermo del Toro,  which is a real godsend for fans of these two influential filmmakers.  Also included is footage of a variety of melons being stabbed, and the original theatrical trailer.