The Birds is full of scenes that are worthy of being broken down and analyzed.  Rather than the schoolhouse attack, or Melanie’s attack in the room at the end of the film, I wanted to take a look at one short but memorable sequence:  Lydia Brenner’s visit to Dan Fawcett’s farm.

I first became interested in Hitchcock at about the age of 10.  One of the local TV affiliates in Los Angeles used to air an “Alfred Hitchcock film festival” every year, with a different movie televised every night for a week.  I saw The Birds on television that week.  When it aired the next year, I watched again, and this is the sequence I was waiting to see.  At the time, I was fascinated by the image of the man with his eyes pecked out.  Later on, I realized how well structured the entire scene is, just like the rest of the film.

This sequence lasts around 2 minutes and 40 seconds, and features 21 editorial cuts, which means an average of 7.6 seconds per shot.  When you break it down to the individual shots, there is nothing average about it.

I call this a palindromic, or nesting doll sequence.  There is a series of shots that is later repeated, in reverse order, for a different dramatic purpose.

The scene opens on a dissolve from Melanie, into a long shot of Lydia’s green pick up truck approaching Dan Fawcett’s farm.  The camera remains static, forcing the viewer to follow the truck.  This shot lasts around 14 seconds. 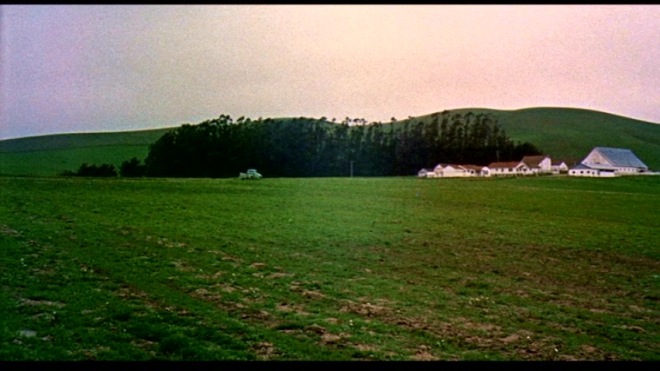 Next the camera is set up in the driveway.  The truck passes in front of the camera, makes a counterclockwise half circle, and parks.  This shot lasts around 13 seconds. 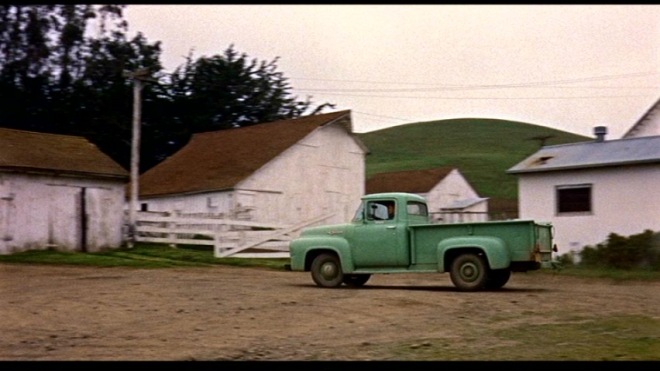 Then Hitchcock cuts to a medium shot of Lydia exiting the truck.  The camera then pans left as she approaches George, a farmhand in front of a tractor.  They briefly converse in a perfectly framed two shot, then she walks up the path to the front door of the house.  This is all done in one shot with no cuts, in a shot lasting about 28 seconds. 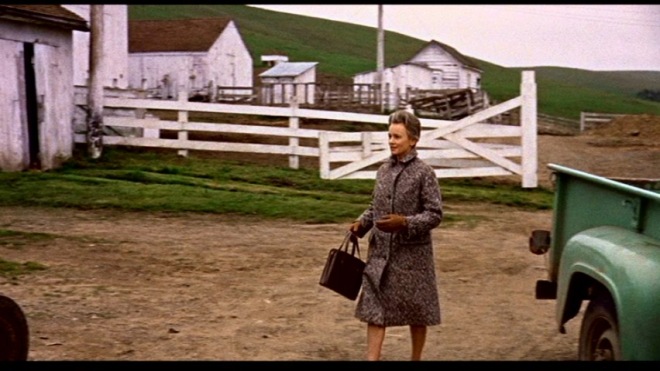 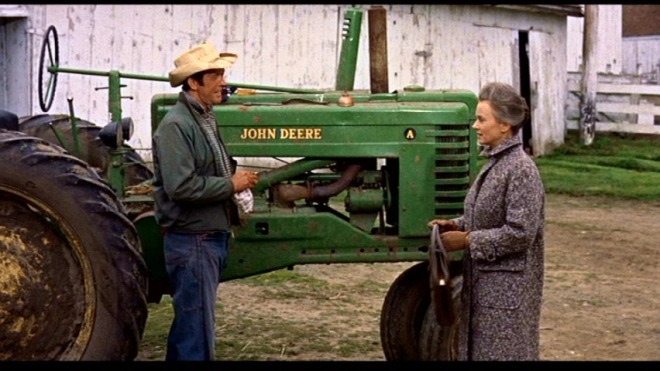 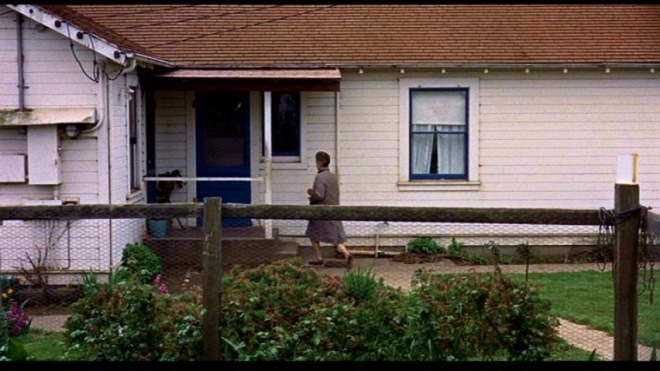 Hitchcock then cuts to a medium shot of Lydia on the porch where she knocks, looks in the window, and then enters the house.  This shot lasts around 10 seconds. 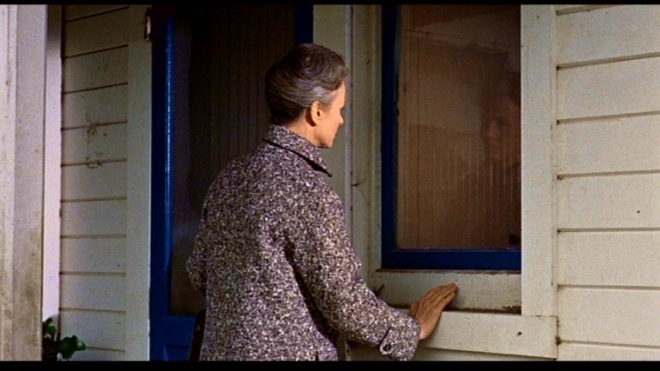 Next Hitchcock cuts to the home’s interior, as Lydia enters the front door.  She calls out for Dan, looks around, and then notices the broken teacups, which the camera zooms in on.  We see her reaction, then the camera pans left as she moves towards the hallway.  This scene lasts around 21 seconds.  Hitchcock described it this way:

Another improvisation is the mother driving up to the farm, going into the house and calling the farmer before noticing the wrecked room and discovering the farmer’s body.  While we were shooting that, I said to myself, “This doesn’t make sense.”  She calls the farmer and he doesn’t answer.  Well, a woman in that position wouldn’t push it any farther; she’d walk out of the house.  So that’s how I got the idea to keep her there by having her notice the five broken teacups hanging from the hooks. 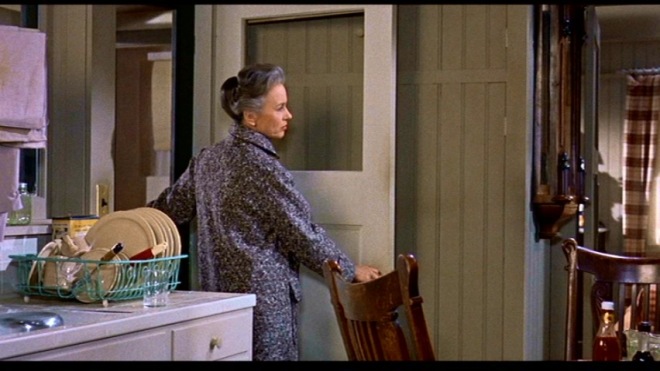 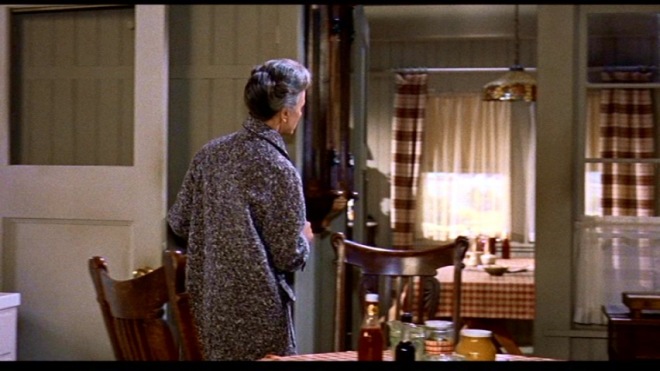 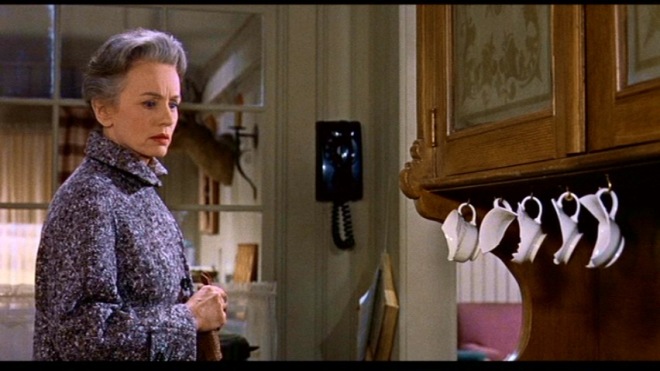 Next the camera holds on Lydia as she walks down the hallway.  There is complete silence as she slowly walks to the end of the hall and looks left.  This shot last around 18 seconds. 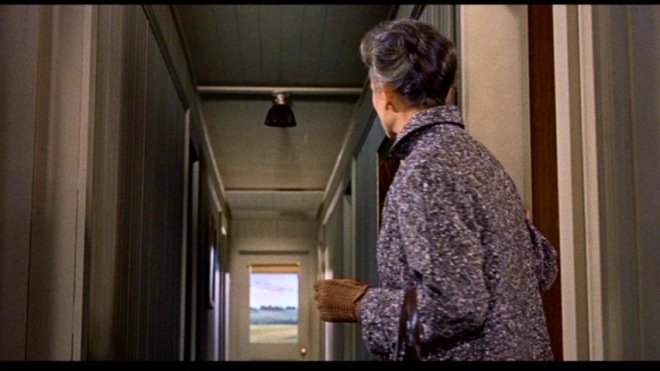 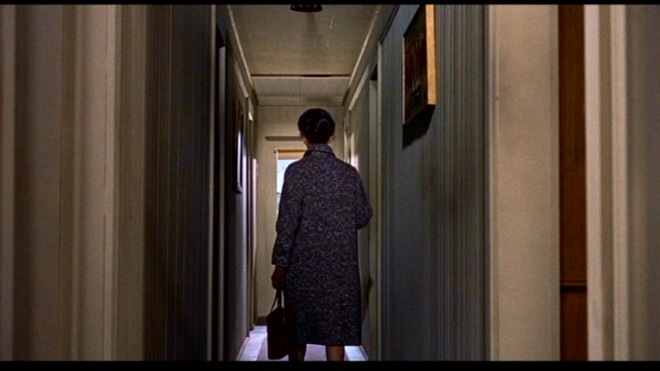 Next the camera is inside the bedroom.  It cuts to a medium shot of Lydia moving her head into the room.  Now Hitchcock switches to the subjective point of view, as he so frequently did in his career.  We get a series of shots of Lydia looking, then we get a shot of what she is looking at.   The first shot of Lydia lasts maybe three seconds.  First she looks at the broken window, with a dead gull hanging in glass, for about two seconds.  Then we cut back to Lydia continuing to sweep her gaze from left to right.  After another three seconds, we cut to what she is seeing.  The general disheveled state of the room, with another dead bird on the bed. 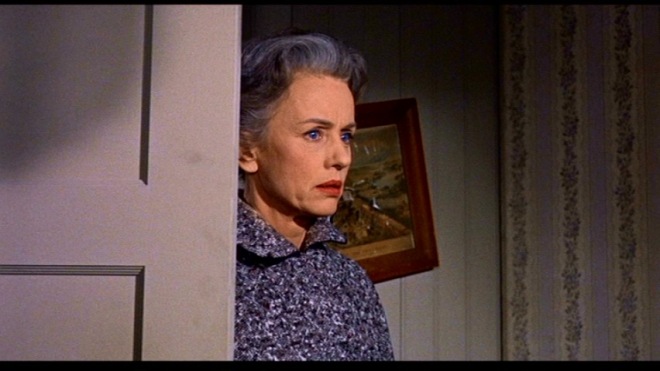 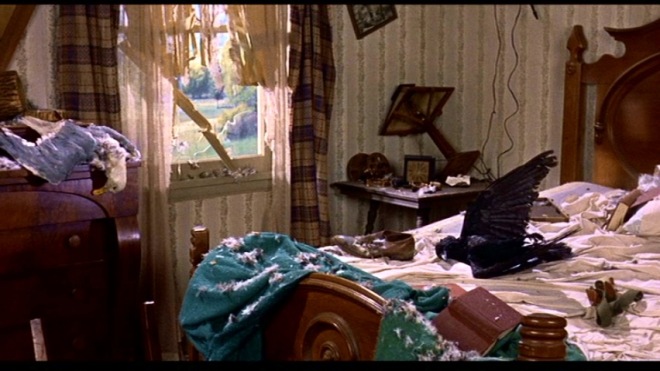 After holding this shot for two seconds, we return to Lydia again.  The camera stays on her for about 4 seconds as she continues looking left to right, finally looking down.   We then cut to a pair of bloody feet, and torn and bloody pajama legs almost up to the knee.  The cuts continue to quicken;  this shot lasts only about a second.  Then we get the fourth shot of Lydia at the door, as she looks around it to see who is lying there.  This shot lasts maybe two seconds.  And then, we get the shot of Dan Fawcett propped against the wall, clearly dead, with his eyes pecked out.  Rather than zooming in here, Hitchcock does three quick cuts, taking us ever closer, until the last image is a close up of the bloody blinded face.  The three shots in total last around two seconds, with the last being the shortest. 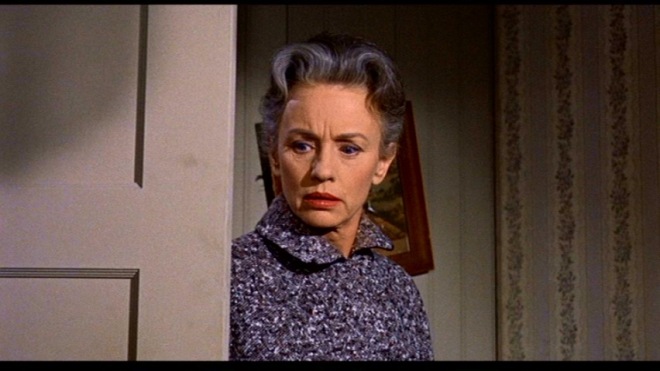 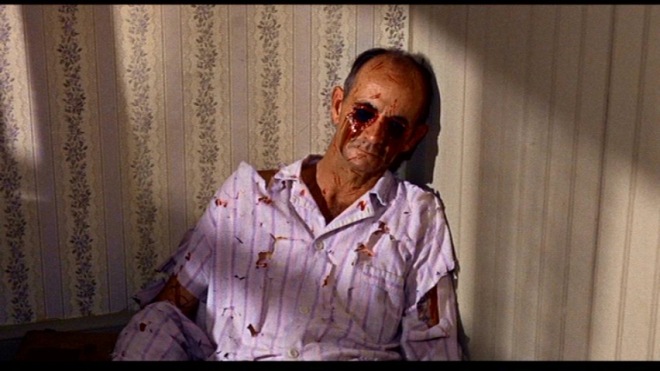 a staccato movement…I wanted a change from the zooming in…And another interesting thing about that moment, I never show the woman’s reaction to it.  I cut to the shoulder.  I never show her face.  I knew I couldn’t.  I knew very well I could never get an expression strong enough.

Next we get the series of reverse shots, mirroring the opening.  Just as the camera held on Lydia walking down the corridor, we now see her running from the room towards the camera, in a shot lasting five seconds. 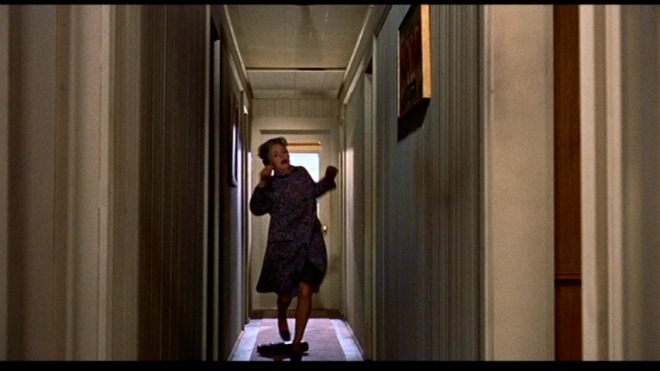 Just as we saw Lydia approach George and walk up the path in one shot, we now get the reverse.  The shot opens standing just outside the gate to the house, with a little bit of George’s pant leg visible on the right.  Lydia comes out of the house, runs into a close-up two-shot with George, tries to scream but is inarticulate, then runs on.  This shot lasts around 11 seconds. 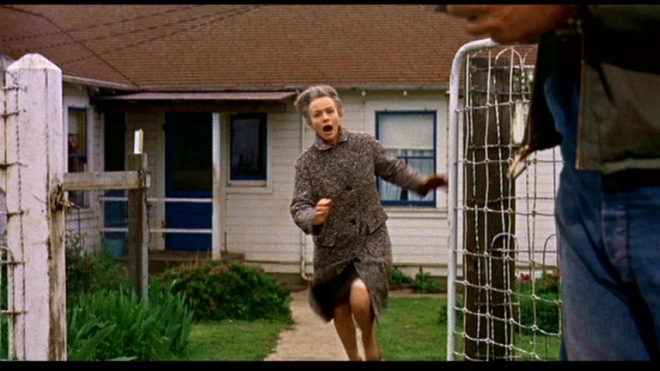 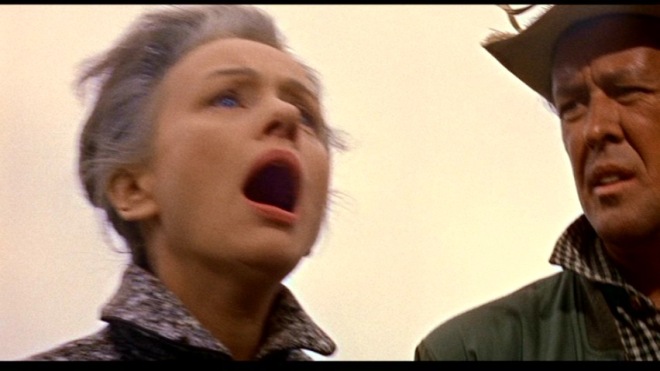 I would like to quote extensively from Hitchcock here, as he talks about the importance of both the sound and the visual, before we see our last mirror shot of the truck driving away rapidly in a long shot, leaving a trail of dust.

The soundtrack was vital just there; we had the sound of her footsteps running down the passage, with almost an echo.  The interesting thing in the sound is the difference between the footsteps inside the house and on the outside.  Did you notice that I had her run from the distance and then went to a close-up when she’s paralyzed with fear and inarticulate?  There’s silence at that point.  Then, as she goes off again, the sound of the steps will match the size of the image.  It grows louder right up to the moment she gets into the truck, and then the screech of the truck engine starting off conveys her anguish.  We were really experimenting there by taking real sounds and then stylizing them so that we derived more drama from them than we normally would.

For the arrival of the truck, I had the road watered down so that no dust would rise because I wanted that dust to have a dramatic function when she drives away.  The reason we went to all that trouble is that the truck, seen from a distance like that, moving at a tremendous speed, expresses the frantic nature of the mother’s moves.  In the previous scene we had shown that the woman was going through a violent emotion, and when she gets into the truck, we showed that this was an emotional truck.  Not only by the image, but also through the sound that sustains the emotion.  It’s not only the sound of the engine you hear, but something that’s like a cry.  It’s as though the truck were shrieking. 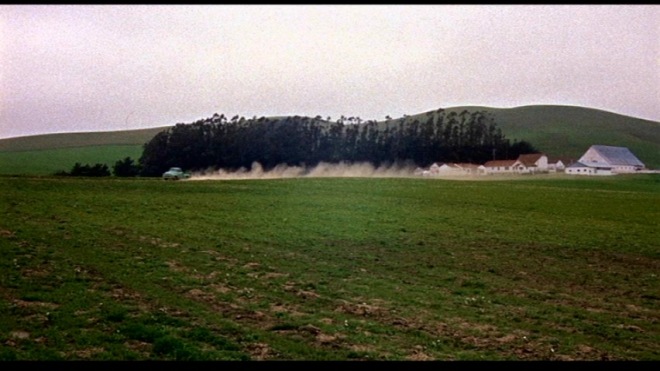 In a film full of technically challenging scenes, this sequence is fairly standard.   But Hitchcock devoted a significant amount of time to this sequence, and that devotion is reflected in the final project.

2 thoughts on “THE BIRDS: Deconstruction of a scene – The death of a farmer”