Screenplay by Jay Presson Allen, based on the novel by Winston Graham

Marnie has always been a somewhat divisive film in Hitchcock’s body of work.   The movie has ardent defenders, such as Hitchcock scholar Robin Wood, who goes so far as to say “if you don’t like Marnie, you don’t really like Hitchcock.”  There are also many Hitchcock fans, myself included, whose feelings are mixed at best.  It is a frustrating film;  there are many great sequences, but there are also moments that just don’t quite come together.  Just as Sean Connery’s character Mark Rutland played the amateur psychologist in the film, it is tempting as a Hitchcock fan to analyze the film and ask “What is missing?  What is it that makes this film a ‘flawed classic’ as Truffaut called it?”

The story:  The plot focuses on a compulsive thief named Marnie.    She has an established a pattern of stealing from her employer, then changing her name and appearance, moving to another town, and doing the same again.  In between thefts, she visits her mother.  The mother/daughter relationship is strained to say the least.  Marnie’s mom is friendly, but there is no sense of affection.  Marnie also has a horse named Forio, apparently the only creature with whom she has formed an emotional bond.  Marnie finally meets her match when she steals from Mark Rutland, who tracks her down.  Instead of turning her over to the police, he basically blackmails her into marrying him!  We then learn that Marnie wants absolutely nothing to do with the touch of a man.  Mark begins to play amateur psychologist, trying to “solve” Marnie.  Finally, Mark forces Marnie’s mother to come clean with a story from Marnie’s childhood, which is the root of all of her problems.

The centerpiece of the movie is the so-called rape scene.  When Mark and Marnie are on their honeymoon,  Mark forcefully removes her nightgown, and she stands naked, cold and emotionless.  Later, he forces himself on her in bed.  Afterward he is apologetic.  Evan Hunter, who had written the screenplay for Hitchcock’s previous film The Birds, was initially hired to write this screenplay as well.  He struggled with the rape scene.  He felt that there was no redemption for Mark’s character after this scene.  Ultimately, he wrote the scene two different ways in his final draft;  one was the way Hitchcock wanted it and the other was the way he thought it should play out.   Shortly after submitting his alternate version of the scene, he was fired by Peggy Robertson, Hitchcock’s assistant.  The final screenplay was written by a woman, Jay Presson Allen, who claims she had no problem writing the scene whatsoever.

Ultimately, I think the problem with the scene is it goes too far.  When Mark removes Marnie’s nightgown, and sees her reaction, he immediately covers her with his robe.  If the scene had ended there, the impact would have been the same.  However, in forcing himself on her in bed, Hitchcock employs a subjective POV shot of Mark above, lowering himself down, as his face comes closer to the camera.  This shot is just too much.  Mark is violating the entire audience here.  It is uncomfortable to say the least.  While I don’t think this scene prevents the audience from liking Mark (after all, this is Sean Connery we are talking about), I do think the scene was not necessary.

Further, I question Mark’s motives with Marnie.  He claims to love her.  But the way he continues to try to analyze her does not play like a man trying to help the woman he loves.  Rather it plays like a man enjoying the role of armchair psychologist, trying to solve a problem that is vexing him.  This emotional disconnect is detrimental to the story.

The cast:  When this film was in the early writing stages, Hitchcock envisioned Grace Kelly in the lead role.  He went so far as to visit Grace in Monaco, and actually got a verbal commitment from her to come out of retirement to play the role.  Ultimately though, Grace declined to appear in the film, which was a major blow to Hitchcock.   Had Grace appeared in the film, it almost certainly would have been a better movie.  But even Grace Kelly could not save a problematic script and some almost lackadaisical technical choices.  One wonders if Hitchcock was not already starting to lose interest when Grace Kelly bowed out.

Technical choices:  By the time Marnie was made cinema was changing in significant ways.  The French New Wave was helping to break down some of the staid stylizations that had been commonplace in movies.  Hitchcock loved to shoot on the lot, where he had complete control.  But many of the things that Hitchcock employed frequently, like back projection and matte paintings, were already starting to look old-fashioned.  For the street where Marnie’s mother lives, Hitchcock ordered a large matte painting of a ship to be placed at the end of the street.  This setting has a clear artificiality to it.  Some critics have called this a deliberate choice, implying that Hitchcock was returning to his German expressionist roots.  However, even Hitchcock himself admitted in an interview that the painted backdrop was “bad”.

The scene in Mark’s office, with the very expressionistic storm, and the tree crashing through the window, has a very artificial feel too.

Finally, every time Marnie sees the color red she has a strong emotional reaction.  For these scenes, Hitchcock colors the screen in a garish red, while a musical cue from Bernard Herrmann repeats.

Ultimately, these visual choices do not completely dampen the film’s experience, but they do give it a slightly tired, old-fashioned feel that is at odds with the emotional complexity of the story.

Hitchcock touches:  After focusing on some of the elements that are problematic, let’s look at what works.  After all, this is still a very solid film.  The opening sequence is great.  Marnie is introduced walking away from the camera, yellow purse tucked under arm.  An air of mystery is established.  Her change of identity is done in montage, showing only hands.  Finally she gets her big reveal as her head rises from the sink, and Herrmann’s score rises.    It’s a strong and memorable sequence. 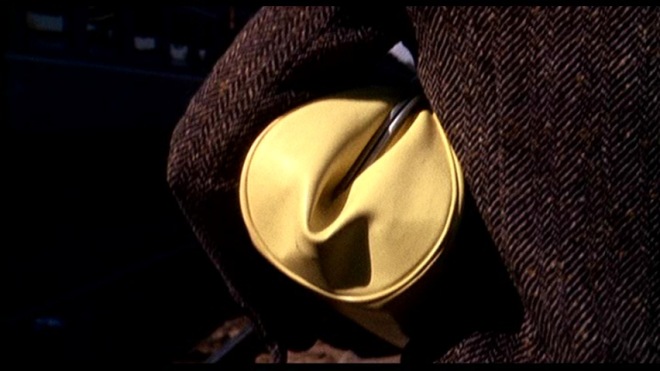 All of the scenes at Rutland’s come off very well, employing many of Hitchcock’s trademark subjective shots, as Marnie and the viewer learn the ins and outs of the office, including where the combination to the safe is kept.  And the actual theft of the money is filmed ingeniously, with a “split-screen” effect, as the cleaning woman works her way down the hall on the left side of the screen while Marnie steals the money from the office on the right.

All of the scenes with Diane Baker as Lil work very well.  Hitchcock’s camera frames her face in many interesting ways.

Finally, the party sequence is fantastic.  Hitchcock borrows from himself, with a long, slow tracking shot down a stairway that reminds the viewer of a similar shot in Notorious almost thirty years earlier.

Performance:   Tippi Hedren isn’t bad in the starring role, but somehow I just don’t quite feel as if she pulls it off.  Granted, it is a challenging role, but Marnie the character is not as good a fit for her as Melanie Daniels was in The Birds.  Sean Connery was well cast in his role, again a role that is very challenging.  The way the part is written, it’s hard to feel much sympathy for this guy.  The real stand out performances for me are Louise Latham as Marnie’s mother, and Diane Baker as Mark’s sister-in-law Lil.  Alan Napier is an always solid character actor, but he wasn’t given much to do with his part.

Source material:   Hitchcock’s film is based on the 1961 novel by Winston Graham.  The novel is interesting for a couple of reasons.  First of all, it is written in the first person.   Being a man myself, I won’t comment on how “womanlike” the voice may or may not be (I leave that to the experts) but it is a very engaging read.  So not only did Mr. Graham decide to write a book from the point of view of a woman protagonist, but he also made her a thief with a troubled childhood.   The basic plot of the story is the same as the movie.  The book takes place in Britain, not the States.   There is also a psychiatrist in the novel, who Marnie sees basically to placate Mark.  In the movie, Mark became the amateur psychiatrist himself.   Also featuring prominently in the novel is a character named Terry, a cousin of Mark, who puts the moves on Marnie more than once, and ends up betraying her at the end, as a way of getting back at Mark.  His character was eliminated from the novel, and replaced with the Diane Baker character Lil.

Here is a small sampling of Graham’s writing, in this case the rape scene:

He grabbed my other arm, and my frock slipped down.  I felt an awful feeling of something that seemed to be half embarrassment and half disgust.  I was fairly shivering with rage.  One minute I felt I’d let him get on with his lovemaking and be like a cold statue dead to every feeling except hate, and just see what he made of that.  But the next I was ready to fight him, to claw his face and spit like a she-cat that’s got a tom prowling round her that she doesn’t want.

Recurring players:  Tippi Hedren had just starred in The Birds.  Bruce Dern would later star in Hitchcock’s last film, Family Plot.  Henry Beckman, who plays a detective, had earlier played a prisoner in The Wrong Man.  Edith Evanson, the nearly-deaf cleaning lady who doesn’t hear Marnie, had earlier played the housekeeper Mrs. Wilson in Rope.  Kenner Kemp and Bert Stevens (extras in the party scene) had earlier appeared as extras in The Paradine Case and North by Northwest.  Louise Lorimer, who plays Mrs. Strutt, would later play Ida Cookson in Family Plot.  And Hal Taggart (man at racetrack) would later play an ambassador in Topaz.

Where’s Hitch?  Hitchcock’s cameo comes just at the 5:00 mark in the film.  As Tippi Hedren walks down the hotel corridor, Hitchcock exits a hotel room in the foreground, looking somewhat guilty.   One wonders what he was up to in that room!  He then glances to his right, looking directly at the camera for an instant.

What Hitch said:  Hitchcock’s feelings about Marnie were mixed.  He did say the following in conversation with Truffaut:

What really bothered me about Marnie were all the secondary characters.  I had the feeling that I didn’t know these people, the family in the background.  Mark’s father, for instance.  And I wasn’t convinced that Sean Connery was a Philadelphia gentleman.  You know, if you want to reduce Marnie to its lowest common denominator, it is the story of the prince and the beggar girl.  In a story of this kind you need a real gentleman, a more elegant man than what we had.

I find these comments very interesting.  While this film has some issues, I certainly don’t think Sean Connery was not enough of a “gentleman”.

Definitive edition:  The 2013 blu ray release is the best version of the film available.  The picture quality on the Marnie blu ray is not consistent;  it is very grainy, and has some color issues as well.  This film could do with a proper restoration, which it probably won’t get, so this may be as good as it gets.  The 2 channel soundtrack is good.  Included is a 58-minute documentary, which includes interviews with Tippi Hedren, Diane Baker, Louise Latham, and Jay Presson Allen.  Also included are “The Marnie Archives” which includes production photos and vintage promotional material, and the original theatrical trailer.