Night Train to Munich is often overlooked in discussions of Hitchcockian films, most likely because the film is not well known today.  But the connections to Alfred Hitchcock’s 1938 classic The Lady Vanishes are numerous.  The two films share the same screenwriters (Frank Launder and Sidney Gilliat), the same leading actress (Margaret Lockwood),  the same editor (R. E. Dearing), and the same musical composer (Louis Levy).  They even share two characters, Charters and Caldicott (played by Basis Radford and Naunton Wayne).  One review refers to this movie as an “unofficial sequel” to The Lady Vanishes, and while that is a stretch, there is no doubt that Night Train to Munich owes its existence to the success of Hitchcock’s earlier film.

In that earlier film, the screenwriters had hinted at the threat of war looming over Europe without naming the enemy.   By the time work began on Night Train to Munich war had begun, and the enemy (Nazi Germany) could be named and shown.   The movie opens with the Nazi invasion of Prague.   Axel Bomasch (played by James Harcourt) is a Czech scientist working on a new type of armor.  He is secreted away to London before the Nazis can get their hands on him.  His daughter Anna (Margaret Lockwood) is not so fortunate;  she is taken by the Nazis to a concentration camp, where she befriends another prisoner named Karl Marsen (Paul Henreid).   Karl concocts an escape plan, and the two make their way to England.  Anna establishes contact with Dickie Randall, a British intelligence agent played by Rex Harrison.  After a nice “meet cute”, Harrison reunites Anna with her father.   Without giving away too much,  the Bomasch’s are captured by Nazi agents and taken to Germany, leaving it up to Dickie Randall to attempt a rescue operation. 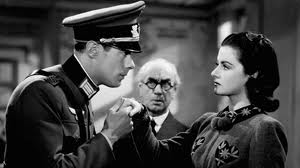 The final act of the movie, which takes place on a train in Germany, is by far the best portion of the film.  The screenwriting duo of Launder and Gilliat were adept at mixing tone, combining suspense, action and humor to very good effect.  This portion of the film is very redolent of The Lady Vanishes,  and just about makes up for the slow build.  The climax of the film finds the protagonists literally hanging by a wire, as they attempt to escape to Switzerland in an aerial tram.   While this film is not as consistently engaging as The Lady Vanishes, it is entertaining, and recommended to fans of Hitchcock, Rex Harrison, and Margaret Lockwood.

Carol Reed:   Night Train to Munich was directed by a young Carol Reed.   At this time Reed was already established in the British film industry, but he would not achieve worldwide acclaim until the late 40’s, with movies like The Fallen Idol and The Third Man.  Reed would eventually win a Best Director Oscar for Oliver! in 1968.

Performance:  Margaret Lockwood is solid as always in the lead actress role, adept at mixing vulnerability and strength.  Rex Harrison also brings his unique vivacity and humor to a role that was probably a bit droll on the page.   While Harrison and Lockwood are both good, unfortunately they do not have a strong chemistry together, certainly nowhere near as strong as the chemistry shared between Lockwood and Michael Redgrave in The Lady Vanishes.    I’ve never been a big fan of Paul Henreid, but I would say he was well cast in this movie. The real scene stealers in this movie, however, are two minor characters, who over time would become two of the most beloved characters in British film history.

Charters and Caldicott:   Everyone who has seen Alfred Hitchcock’s The Lady Vanishes remembers Charters and Caldicott, the two Englishmen who were more concerned with cricket matches than with a missing lady and political intrigue.  Screenwriters Frank Launder and Sidney Gilliat had created the two characters to represent typical Englishmen abroad.   Many of their lines are played for laughs, but when the going gets tough, they courageously defend their fellow countrymen.  In Night Train to Munich, actors Basil Radford and Naunton Wayne reprise their roles as Charters and Caldicott.   They have such a strong rapport together, it is easy to believe these two vagabonds have been travelling the globe for many years, getting into one adventure after another.  Honestly, these characters are so enjoyable that I would recommend this movie on the strength of their performances.   Charters and Caldicott would appear in two more movies, and two BBC radio serials, after Night Train to Munich.  They were also set to appear in the 1945 Launder and Gilliat film I See A Dark Stranger, but Basil Radford and Naunton Wayne demanded larger roles, which they felt were deserved due to their increased popularity.   When Frank Launder refused to increase the size of their roles, Radford and Wayne walked away from the project.    They would appear together in several more films, but with different character names.  They were still playing Charters and Caldicott in all but name;  the rights to those names were held by Launder and Gilliat.

Charters and Caldicott would get their own BBC television series in the 1980’s, with different actors in the roles.  To this day, the characters, and the actors most associated with them, are beloved in England.

Definitive edition:  In 2016, Criterion issued this movie on blu ray for the first time.  As is always the case with Criterion, the print is quite good.   There is an unusual dearth of bonus materials for a Criterion DVD.   The only bonus is a “video conversation” between film scholars Peter Evans and Bruce Babington, which focuses primarily on the careers of Launder and Gilliat.