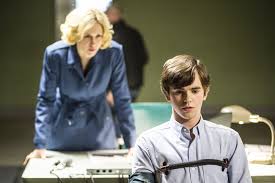 So Sheriff Romero is driving down the road, and who should he see coming out of a field towards the road, but Dylan?  And what does Dylan tell him?  “Nick Ford is dead.  I killed him.  They have Norman.”  Romero quickly processes these 10 words, and all they entail, and simply says “get in.”  Just another typical day in White Pine Bay for the most badass sheriff West of the Pecos.

Of course Dylan and Romero free Norman (we knew he wasn’t going to linger in the box until season three), and then there is the aftermath to deal with.  Anytime Norman tries to talk openly and honestly with Norma about his blackouts, she immediately suppresses him.   Only Norma could respond to what is essentially a confession of murder with “Eat your pot roast before it gets cold.”

It is very nice to see Norman confide in Emma, to a point, even if it was only done to try and get her to stay at the Motel.  Norman is making a list and checking it twice;  the last entry on that list is “Mother.”  Certainly the writers don’t expect us to believe that Norman is going to take her out?

Romero and Dylan continue their partnership, to take care of the inevitable.  It was definitely wish fulfillment to see that Sheriff Romero is a “man of his word”, although it was kind of sad to see Jodi become collateral damage, even if that seemed inevitable too.

Dylan’s embrace of Norman, after Norman is pulled from the box, may be the most touching moment in this show’s 2 season run.  Although Norma telling Dylan that he is a miracle was pretty damn cool too.  Dylan is really the moral center of the family, a magnet that pulls the others in the right direction.

And the finale is the lie-detector test, which has been set up for a couple weeks, the results of which are no surprise at all.

So:  no big cliffhangers, no mind-boggling revelations, yet a very satisfying, and at times sweet, finale.  Almost a clean slate going into season three, certainly from a standpoint of character development.   Not your typical season finale episode.  Bravo for that! 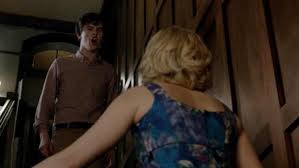 You really have to feel for the Bates family.  (I would consider Dylan a Bates family member, even though he has a different last name.)  Any time it looks like things might be going well for one of them, you can be sure that disaster is waiting around the corner.

The writers have done a good job of building tension over the last couple of episodes, as the finale of season two draws closer.  This may be the best episode of the second season to date.

First off, Nick Ford is one serious dude.  There is no doubt that he means what he says.  Norma must be regretting that she ever struck up a conversation with him.  He wants Zane dead.  Who doesn’t?  It seems like even Zane’s own sister is tacitly signing off on getting rid of him.  So why in hell did she put him in charge in the first place?  She had to know what an idiot and a hothead he is.  So it would seem that there is a simple resolution here:  Dylan kills Zane, everyone is happy.  Of course nothing will resolve itself that easily on this show.

Sheriff Romero tries to get Norman to talk about what happened at Miss Watson’s house the night she died.  Norman’s shock about having sex with Miss Watson is not feigned, because of course he blacked out that night.   When will all the truths of that night be revealed?  Hopefully we will not have to wait until season three.

And let’s not forget that Norma’s crazy comes back with a vengeance.  Norma leaves her dinner date with George, partly because she feels so out of place, but also because she feels bad for Norman.  Then, when Norman coolly brushes her off, she becomes enraged, ultimately flying back to George’s arms, and barely managing to keep her panties on until she gets in the door.  What would a psychologist say about her behavior?  How much blame do we lay at Norma’s door for Norman’s condition today?  Did she trigger it?  She certainly exacerbates it.  And what of her own mental state?  The next two episodes should be good.  Here is hoping for some resolution.  Don’t leave us hanging for a year!

Poor Norman.  There he is, sitting behind the wheel of the family car, about to take his driver’s test, a significant rite of passage, when up storms his mom and rats him out to the driving instructor.  Says that he has been blacking out.  Under the circumstances, Norma is doing the right thing, but the timing of it makes it seem like a major betrayal.  But what led up to this moment?

Norman blacks out a second time in Cody’s presence.  Then they take a trip to the “swimming hole.”  While they are making out, Emma shows up with her pot-slinging boyfriend, and at Cody’s insistence they decide to hang out together.  First Emma’s guy jumps in the water on the rope swing, then Norman follows, and finally Emma.   The end results here were so predictable that I was really hoping the storyline would go in a different direction.  Emma has a scare in the water, Norman overreacts.  It is obvious that Norman has feelings for Emma, but are they romantic feelings?  It feels like any opportunity they had to become a couple has long since passed.  Like they are both above and beyond that kind of relationship.  Perhaps not.   When Cody shares with Emma that Norman has been blacking out, and we see the conflicted look on Emma’s face, there is no doubt that she is going to tell Norma.

Norma meanwhile has severed her ties with Nick Ford, after the councilman that she called a dick conveniently dies in a car accident.  Then Norma pursues the council seat for herself!  Hard to believe that would sit well with Nick Ford, but it would appear that he had something to do with her getting the council seat.  Norma has another encounter with George (Michael Vartan), and one has to believe a potential hookup is in the near future.  But the writers are also building the potential for a relationship with Romero and Norma.

Of course the writers had to throw in another one of those awkward hugs, that is just a little to affectionate for a son of Norman’s age to be having with his mother.  We seem to get one of these obligatory cringe-worthy moments every other episode.   It’s also cool to see Norman stuffing a crow.  In the movie Psycho, the room behind the office was filled with birds.

And Dylan is hooking up with the boss lady (Kathleen Robertson.)  Nothing good ever comes from that, does it?

And the episode ends with a moment of violence that seems to have Norman in hot water again.  How will this situation resolve itself?  Congrats to the show being renewed for a third season.  The ratings took a small dive but are now holding steady at around 2.25 million a week.  Not too shabby.