ALFRED HITCHCOCK AND THE MAKING OF PSYCHO by Stephen Rebello 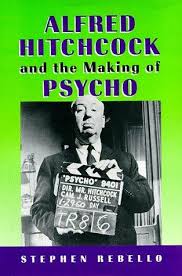 Alfred Hitchcock’s Psycho was not only a blockbuster; it was also a game changer.   In retrospect it’s a little strange, how one little black and white film changed the course of movie history.  Stephen Rebello’s book gives fans a deep dive into the making of this classic movie, exploring truths and debunking myths along the way.

Rebello certainly did his homework.  Not only did he interview many of the cast and crew, he also combed through the Hitchcock collection of papers, which was donated to the Motion Picture Academy library by Patricia Hitchcock.   What emerges is a very thorough exploration of the making of the film. Rebello arranges the material chronologically, beginning with a chapter on Ed Gein, the Wisconsin serial killer that inspired writer Robert Bloch.    From there Rebello gives the reader a chapter on Psycho author Bloch;  he then connects this thread from Gein to Bloch, and finally to Hitchcock.

From this point the author explores every aspect of the film’s journey from screenplay to its release and runaway success.   Psycho screenwriter Joseph Stefano  contributes some great insight into the creative process, writing for and with Hitchcock.  Rebello discusses the casting of the film, and Hitch’s decision to shoot the movie “on the cheap”.

The reader also gets a very detailed description of the movie’s production.  The scenes are so vividly described that at times the reader can almost imagine being on the set.  Of course, many pages are devoted to the infamous shower scene, and Rebello seemingly puts to rest the claim made by Saul Bass that he partially directed the shower scene.

The post-production gets a chapter as well, with much discussion of Bernard Herrmann’s unforgettable musical score.  The marketing of this movie was a vital aspect of the film’s success, and Rebello details the many marketing techniques worked to perfection by Hitchcock.  Rebello concludes with a look at the continuing legacy of the movie.

Not only is the book very informative, it is also thoroughly engaging.   It is a gripping read, not unlike a juicy novel.  I am not surprised in the least that this book was optioned to become a movie.  If you have seen the result, 2012’s Hitchcock, do not read this book expecting it to tell the story of the film.  Where the movie is occasionally over-dramatized, the book sticks to the facts.  And what a great story it is.

This book is  a must read for any true fan of Hitchcock or Psycho.  Beyond that, I think any movie lover in general would find this book hard to put down.  Highly recommended. 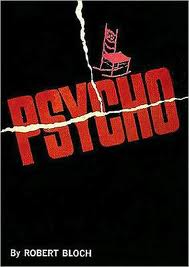 has already explored the long legacy of Alfred Hitchcock’s Psycho in movies and television.  Now let’s take a brief look at the legacy of Psycho in print.

Robert Bloch’s novel first appeared in 1959.  All of the major elements of the movie were already firmly in place in the book, including the surprise ending.  Bloch’s prose style was very straighforward, it was his plotting and structure that made his books memorable.

Alfred Hitchcock put in a “blind bid” for the rights to Psycho, meaning that Bloch did not know the identity of the bidder.  This was fairly common practice at the time, for if an author knew that Alfred Hitchcock wanted the rights to his work, he would have demanded more money.   Bloch reportedly received $9,500 for the rights to his novel, which is a decent amount of money by the standards of 1960, but still far less than he could have received from a high-profile director at a major studio.  There are some unconfirmed stories that Robert Bloch was upset by being “duped” into selling his book rights on the cheap, but there it little evidence to support this.  Bloch would go on to write ten episodes of the Alfred Hitchcock Presents TV show and another seven episodes for The Alfred Hitchcock Hour, which would suggest that Hitchcock and Bloch had a good relationship.

Robert Bloch initially wrote the novel Psycho II as a treatment of sorts for Universal Studios, who had announced plans to produce a movie sequel.  Universal rejected Bloch’s work, and reputedly the studio suggested to the author that he abandon any plans to publish it.  Bloch did publish the novel in 1982, to solid reviews and decent sales.   Many people must have assumed that the movie Psycho II was inspired by the book, as both sequels shared the same title.  The truth is that they have nothing in common, except of course for the character of Norman Bates.  Psycho II is a good read, equally engrossing and unsettling, and a worthy followup to the original novel.   It begins with Norman Bates escaping from the mental institution where he has lived for 20 years.  At the same time, a Hollywood movie studio is planning to make a film about the original Bates murders.  The novel’s greatest failure is in the “gotcha” plot device, similar to the one used in the original novel, where we learn at the end that Norman was actually becoming his mother.  Bloch must have felt a need to create a similar ending here, which was quite unnecessary.

Robert Bloch revisited his most famous creation one last time in 1990, with the release of Psycho House.  This novel focuses on an attempt to create a Bates Motel “theme park” of sorts, a macabre attraction for paying tourists.  An investigative journalist is in town to learn about the opening of the Bates themed property, and bodies once again begin to accumulate.  This is the weakest of the three Psycho novels, but fans of the earlier two will most likely enjoy it.   In Booklist’s review of this novel, they celebrated Bloch’s “marvelous bargain-basement prose, full of well-turned cliches and wry cracks.”  Bargain basement?  That’s a backhanded compliment at best.  Bloch does love alliteration and assonance, and occasionally uses them in a self-conscious manner.   He is also fond of morbid puns, which occasionally work, and other times fall flat.  In one early scene, a character is in a diner, “gazing at the glass-coffined slices of embalmed pies and pastries,” a fairly typical Bloch description.

Bloch was an incredibly prolific writer, publishing over 20 novels and 500 short stories, as well as dozens of television screenplays.  He has been cited as a major influence by many writers in the horror genre, most notably Stephen King.  And yet, were it not for his creation of Psycho, and Norman Bates, he would be virtually unknown today.   Fans of Alfred Hitchcock’s movie Psycho are encouraged to give Bloch’s novels a try, particularly the first two.