When Alfred Hitchcock began production on Rope he set quite a challenge for himself in deciding to shoot the film without editorial cuts, other than those necessitated by changing film reels.  This meant that the actors would have to go 8 or more minutes without a single break.  While Hitchcock eliminated editorial cuts, he did not choose to have a static camera.  The roving camera became his substitute for cutting.

Let’s take a look at one segment, which lasts just a few short minutes, but has no cuts at all.  We will see how Hitchcock used the camera to create tension without editing.

At this juncture in the movie, dinner is wrapping up, and everyone is worried about the whereabouts of David Kentley.   The viewer knows that the body of David Kentley is just a few feet away in the trunk.  As Mrs. Wilson (Edith Evanson) begins to clear the remains of the food, the camera stays on her, even though all the dialogue is happening off screen. 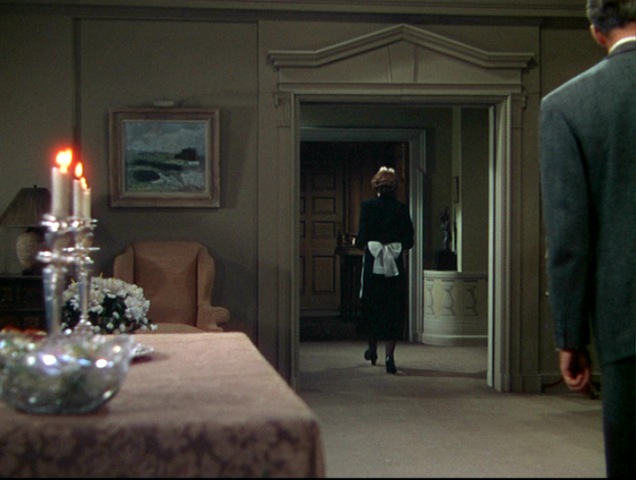 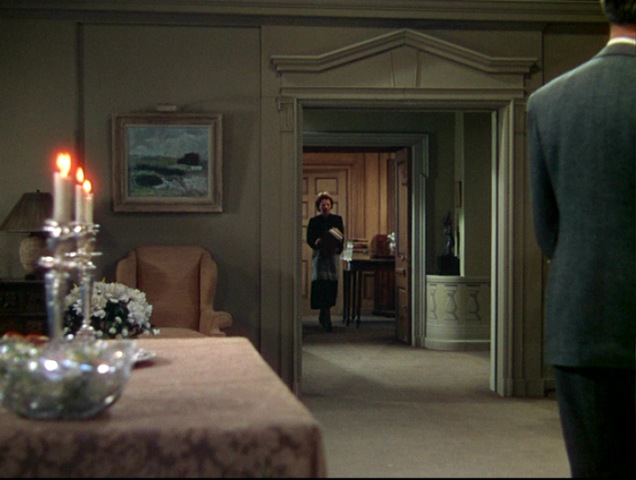 For two minutes of screen time, we watch Mrs. Wilson leave and return; once, twice, and a third time.  The other characters are all talking off-screen.  All we can see is a little bit of Rupert Cadell’s (Jimmy Stewart’s) back.   The dialogue is all about David.  Where is David?  Who last saw David?  Who spoke to David and when?  Hitchcock had to make sure that the dialogue was not essential, because he knew very well the viewer’s attention would be riveted by the on-screen action.  Will Mrs. Wilson open the trunk and expose the murder?  Finally she begins to open the trunk, and is stopped by Brandon (John Dall), who turns the two shot into a three shot.

Now the camera, which has been static for well over two minutes, pans right to show the others in the room. 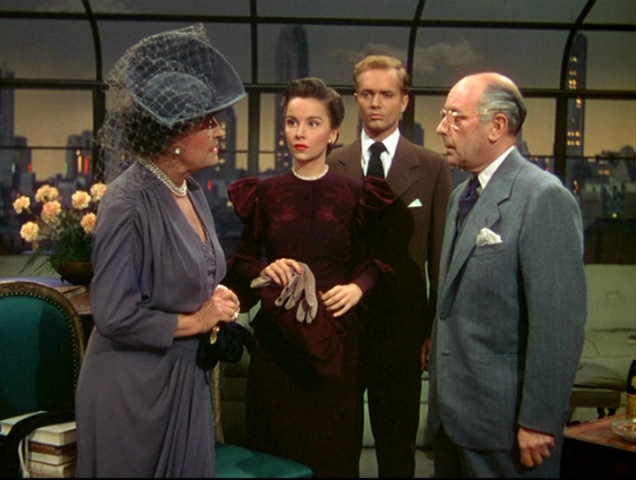 The camera continues to pan right, stopping on Jimmy Stewart in a medium shot.  Clearly he is intrigued by the evening’s events.

Now the camera begins to track to the left, backing out of the room, as most of the characters head towards the door.  The camera lingers on Mr. Kentley (Sir Cedric Hardwicke) who is clearly distraught over his son’s absence.

As the camera pulls back to the entryway, we stop again as Kenneth (Douglas Dick) and Janet (Joan Chandler) create a two-shot.   This shot serves a couple of purposes.  It allows the characters a brief reconciliation, and it frames Hitchcock’s red neon “cameo” in between them.

Next Brandon steps into frame left, once again changing the two-shot into a three-shot.  This happens several times in the film.  Where a conventional movie would use cutting here, Hitchcock achieves his desired effect without needing to cut. 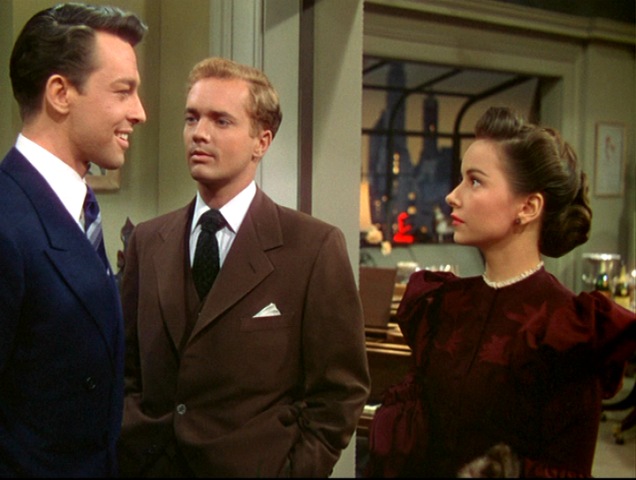 Now the camera will pan to the right, showing us two characters who did not leave the other room.  Cadell is still thinking, trying to put the puzzle pieces together, while he watches Phillip (Farley Granger) get increasingly drunker. 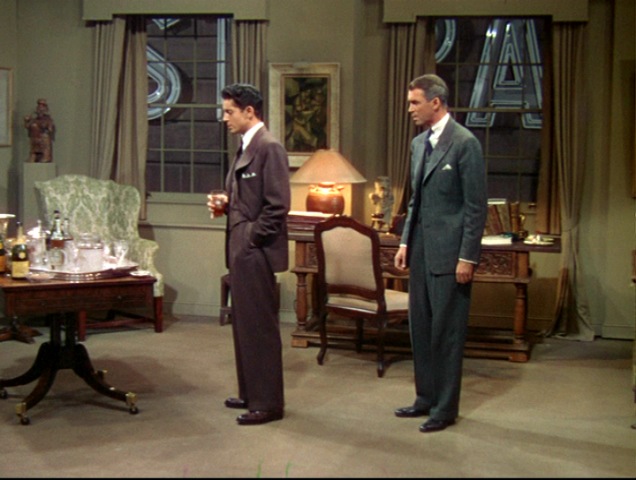 Finally, Rupert Cadell will walk in the other room to collect his hat and leave.  Now comes another piece of brilliant staging.   Cadell puts on the hat, realizes it’s not his, and looks inside the brim, seeing the letters “D K”.   In a conventional film, this shot of the hat would certainly have been a close-up cutaway shot.  But Hitchcock, by having Jimmy Stewart naturally lower the hat to look inside, allows the camera (and the viewer) to see it as well with no need to cut. 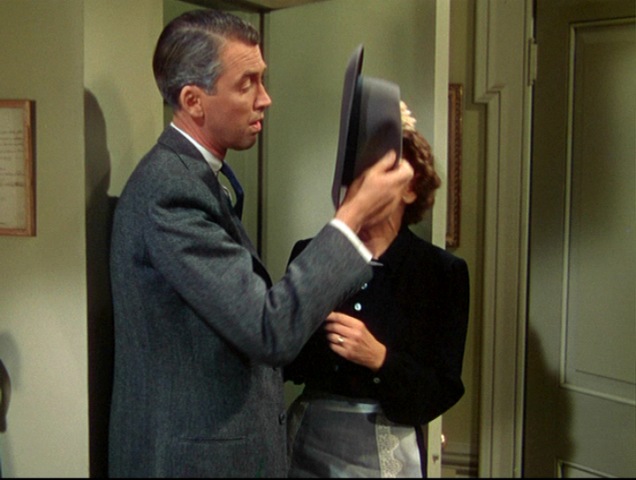 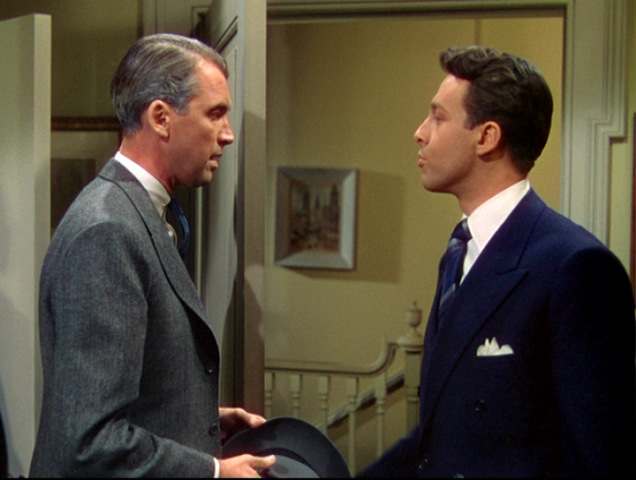 Rupert Cadell leaves, and Brandon closes the door, believing the evening to be a success. 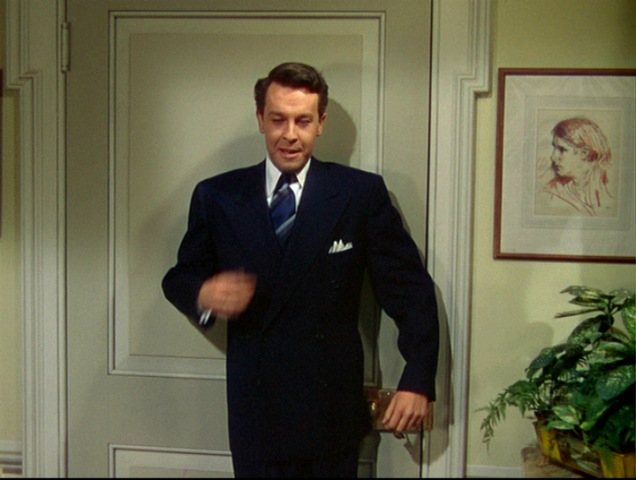 So in these few minutes of screen time, Hitchcock has accomplished several things.  He starts with two minutes of tension building by keeping the camera static on the trunk.  He then uses the roving camera to show us every character in the film.  We see single shots, two shots, three shots, group shots.  We also get an almost casual glimpse of the final clue that will help Jimmy Stewart solve a murder.  And all of this is done with no cutting at all.     Some critics refer to this movie as a gimmick,  but Hitchcock clearly got the emotional effect he was seeking through the use of the camera, without the need for cutting.