Vertigo is one of the most discussed and dissected Hitchcock films of all.   Plot elements, technical elements, psychological undertones; this movie has everything.  I could choose to deconstruct almost any scene in the film.  There are also many unanswered questions.   Such as:  Just how did Scottie get out of his rooftop predicament at the beginning?  How did Judy (playing Madeleine) get into her room in the McKittrick Hotel unseen?  Was the old lady paid off to lie?  And just what is going on with the lighting in the Argosy Book Shop?

I chose to look at the Argosy scene; I think it is interesting for a couple of reasons, and I hope we can dispel at least one of the often mentioned myths about it.  Near the end of this scene, the interior of the bookstore becomes increasingly dark.  At the end when Scottie and Midge step outside, it suddenly becomes bright again. Some have questioned whether this effect was deliberate.  There is also much debate about the source of the sudden light at the end.  Let’s take a look.

To set the scene:  Scottie Ferguson (Jimmy Stewart) is beginning to get reeled in to Gavin Elster’s plot.  Scottie asks his friend Midge (Barbara Bel Geddes) if she knows anyone who is up on the sordid history of San Francisco, and she recommends Pop Leibel (Konstantin Shayne), owner of the Argosy Book Store.

Hitchcock shot this scene with an economy of cutting, using staging, camera movement, and lighting to control the emotion.  There are only eight editorial cuts in the span of just over three minutes, which means an average shot length of 22.5 seconds.

The scene begins on a dissolve of the front of the book store, which is identified on the window.  The interior is clearly visible (you can see Pop Liebel’s head and torso on the upper level of the bookstore).   This shot lasts about 4 seconds.

Hitchcock next cuts to the bookshop interior.  The camera is just inside the door, showing all three characters in a long shot.  We watch Pop Liebel and Midge walk down the stairs.  Pop offers cigarettes to the other two.  This lasts about 37 seconds. 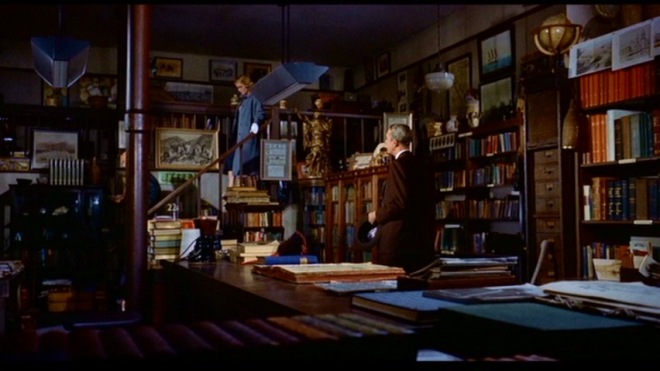 I would like to point out the three visible light sources in the room.  Two long lamps, probably with fluorescent bulbs, at left and center; and a white half dome-covered light about three-quarters right.  Note that none are illuminated, and yet the characters are clearly lit.  You can see the light reflecting on Pop’s bald head.  Obviously cinematographer Robert Burks lit the interior, but what is the intended source of the light, if the visible lights are off?  I believe it is supposed to be sunlight, coming through the windows. 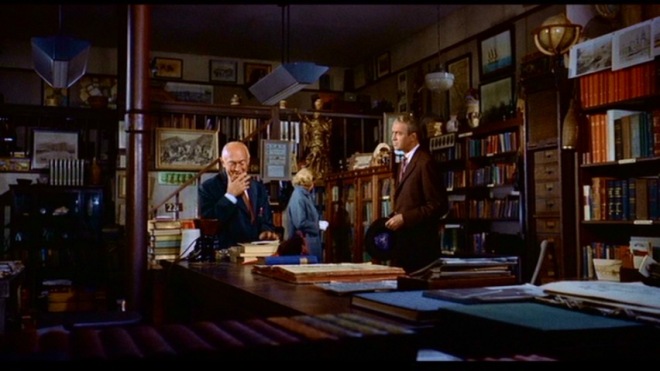 Hitchcock next cuts to a medium shot of Pop lighting his cigarette and beginning to talk about Carlotta Valdez.  This shot lasts about 14 seconds.

As Pop continues to talk off screen, Hitchcock cuts to a medium of Scottie listening, with Midge in the background, browsing book titles.  This lasts around 12 seconds. 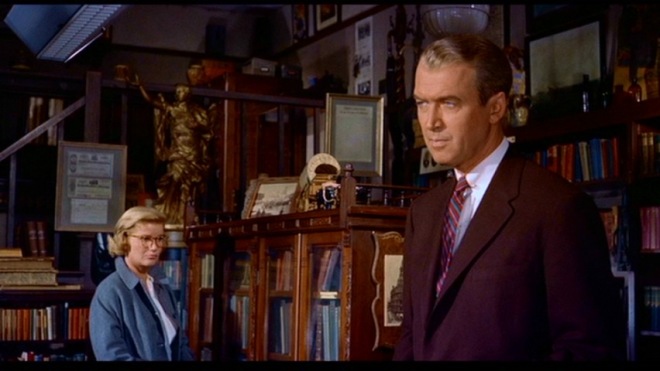 Hitchcock next cuts back to Pop, in the same medium close up.  This shot lasts around 11 seconds. 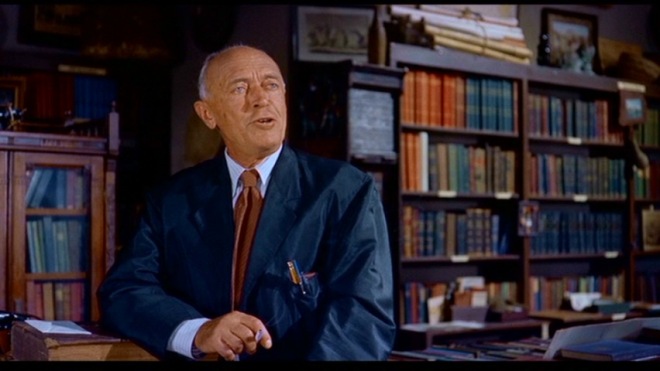 At this point in his narrative, Pop mentions a child.  The cutting changes here.  Hitchcock gives us a medium close up of Scottie which lasts about three seconds.  He is listening intently.  Hitchcock then cuts to Midge, giving her a medium close as she looks at Scotty.  She doesn’t understand his interest in this story, but she is concerned.   This shot lasts only a second.

Then comes the most important, and interesting shot in the sequence.  The camera switches sides.  We are now on the opposite side, facing towards the door.   Why would Hitchcock choose to swing the camera around 180 degrees here?  None of these are subjective shots.  I believe it was because this is the point when he begins to bleed the light out of the scene, with the intention being that a dark cloud is passing in the sky.  Why else show the exterior?  He could have kept the camera precisely where it was before.

This shot is going to last 80 seconds without a cut.  Hitchcock begins it in a very interesting way.  He starts on a medium 2 shot of Pop and Scotty. 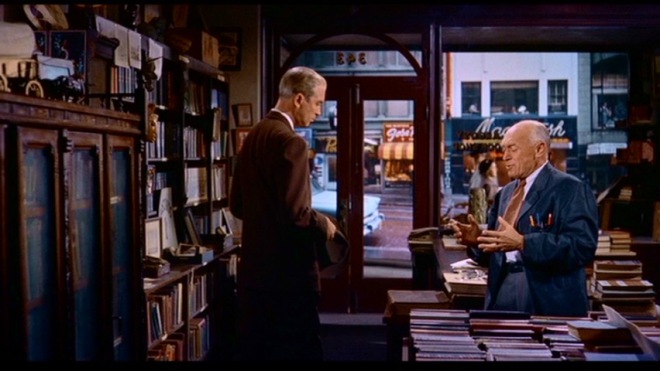 At this point Midge walks into the frame on the left.  The camera actually pushes a bit, following her, until the characters are framed in the three shot which will finish the scene.  This is not a  zoom;  the camera is physically dollying forward behind her. 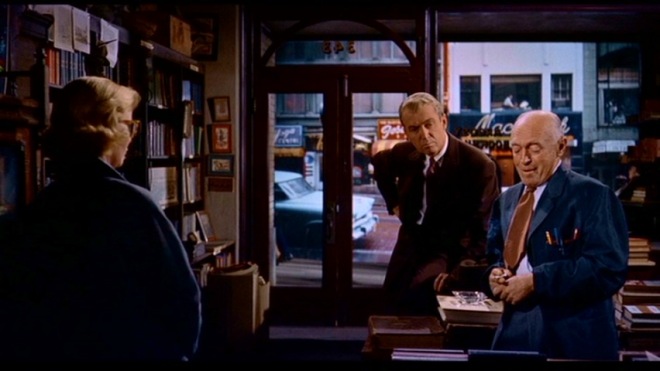 At this point, Pop’s narrative is taking a very dark turn.  Here is the closing dialogue:

Pop:  And she became the sad Carlotta, alone in the great house, walking the streets alone, her clothes becoming old and patched and dirty.  And the mad Carlotta, stopping people in the streets to ask “Where is my child?  Have you seen my child?”

Scotty:  Then she died.

Pop:  By her own hand.  There are many such stories.

Pop interjects a wistful chuckle into this last statement, which says a lot about his character.   He knows many sad stories beyond this one.

Now let’s take another look at the lighting.  We can say definitively that the darkening of this scene is deliberate for a couple of reasons.  First of all, there is no other reason for Hitchcock to move the camera to the other side of the set, facing the windows.   Even more importantly, we can watch the interior light diminish.  Look again at the light in the first frame.  You can see it reflecting on Pop’s bald head.   There is clearly a studio light source above the actors here, even though all visible lights in the book shop are off.

As you look at this sequence of images getting progressively darker, don’t just focus on the characters in the interior. Look at the red and yellow striped awning across the street.  (This was actually a transparency.  The bookshop interior was a set, with the filmed street scene projected outside).  You can see the awning, along with everything else outside, getting darker as well. 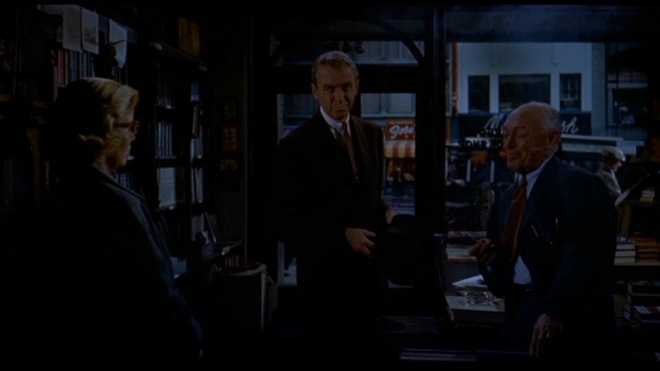 Hitchcock also plays with the sound in this scene.  As Pop has been talking, there has been no  sound other than his voice.  When he gets to his last line “There are many such stories” a streetcar passes outside,  and the clang of the bell breaks the spell we have been put under by Pop’s story. 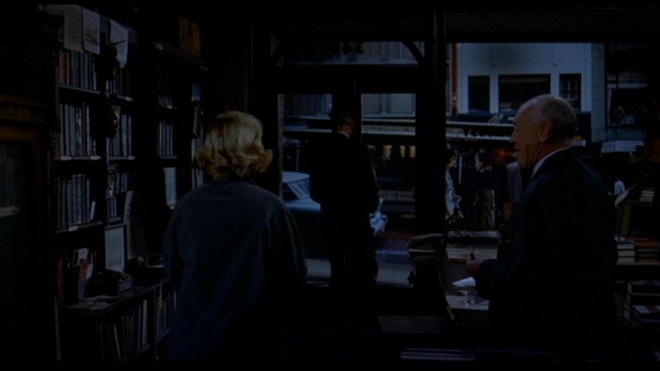 What a masterful and subtle way to create atmosphere.   Hitchcock relied on the long take here, holding this shot for over 80 seconds.   He then removed sound and light, which pulls Scottie (and more importantly the viewer) deeply into the story.  Imagine a cloud passing right as Pop is speaking of Carlotta’s sad end.  This is something that Gavin Elster could never have planned for, but it certainly works in his favor.  Scottie’s obsession is beginning to take hold at this point.

Now Hitchcock cuts to the exterior, and after Scottie and Midge begin to talk, the light comes up again.   Many people think this is the result of Pop turning on the lights in the store.  But if you look closely, you will see the visible lights are still off.  The only one we can’t see is the lamp with the white globe cover.  It is obscured by Scottie throughout this scene.  Yet there is a glow of light on Pop’s head, indicating the studio lights are lit again.   I believe Hitchcock’s intent here was to indicate a cloud had passed.  This is reinforced by the light not becoming bright in an instant, but over the space of a couple seconds.  And yet, the characters, both in profile, seem to be backlit.  (Look at Midge’s hair.  There is more light on the top than the side facing us). What is going on here? 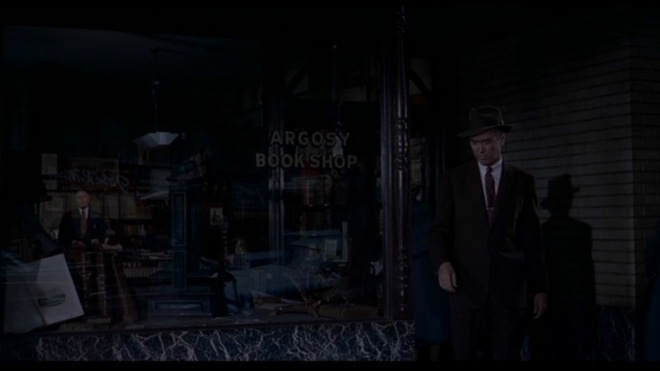 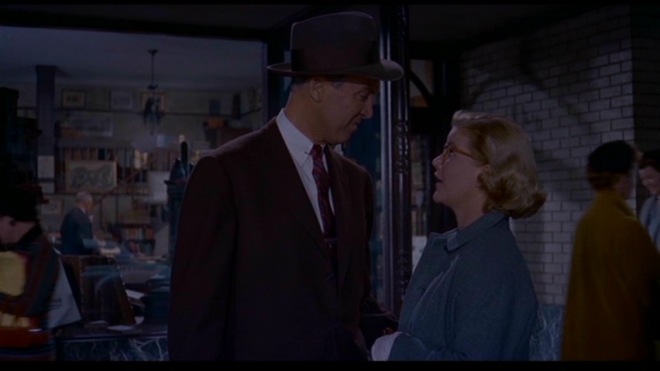 This scene ends as it began, on a dissolve.  The next shot is a dusk shot of Scottie and Midge driving home, which could add support to the idea that they left at sunset, and the light is coming from inside the store.

At the very least we can say the lighting decisions were deliberate, and very effective.  Is it interior light or a passing cloud?  Or perhaps something else?  What do you think?