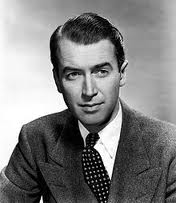 James Stewart, the great American film actor, was born on May 20, 1908 in Indiana, Pennsylvania.  Stewart is one of the most celebrated American actors ever to appear on screen.  He was and is a truly American actor, an Everyman, someone with whom the audience could identify, and sympathize.

Stewart was incredibly prolific; in a career that spanned over half a century, he appeared in hundreds of films, television shows, radio programs, stage plays, and fought for his country in World War II.

James Stewart was nominated for five Academy Awards in his long career, surprisingly winning only once;  he took home the Oscar for Best Supporting Actor in 1941, for The Philadelphia Story.   Stewart made four films with director Alfred Hitchcock during the course of his career, but was not nominated for an Oscar for any of these collaborations.    This is equally surprising, especially considering the power of his performance in 1958’s Vertigo,  certainly one of the most memorable roles of his film career.

James Stewart is one of the most decorated celebrities to serve his country in combat.  His rise from private to colonel in only 4 years is quite astonishing.  During the Second World War, he ultimately served as the command pilot of a B-24 bomber division, which flew many missions deep into Nazi territory.  He received the Distinguished Flying Cross twice, for actions he performed in combat.

Stewart was already a major star before the war, but it was after returning home that his career really exploded.   Consider for a moment Stewart’s film output during the fifties.  In this one decade, from 1950-59, Stewart starred in 22 films!!  His output just in this one decade includes Harvey, three films with Alfred Hitchcock (Rear Window, The Man Who Knew Too Much, Vertigo), The Spirit of St. Louis with Billy Wilder, The Greatest Show on Earth with Cecil B. DeMille, Anatomy of a Murder with Otto Preminger, and 8 movies with director Anthony Mann!  All in the same decade!  Five of the Mann/Stewart collaborations were westerns, including Winchester ’73 and The Naked Spur.  These westerns, which were shot on location whenever possible, had a gritty realism, and featured Stewart playing characters who were hard around the edges and morally ambiguous, a far cry from the characters he had played for Frank Capra early in his career.  These films are credited with revitalizing the western genre.

Alfred Hitchcock and Jimmy Stewart made four movies together.

Rope (1948) –  This is probably the weakest of the 4 Hitch/Stewart collaborations.  It is worth watching more for the technical proficiency employed than the plot.  Stewart was so unhappy with the technical delays that occured on set, he is rumored to have said he would never work  with Hitchcock again!  Thank goodness he didn’t keep his word.

Rear Window (1954) – Stewart was so enchanted by the screenplay, he agreed to take a percentage of the gross rather than an upfront fee, which turned out to be a very lucrative decision.  The film was a hit in its day, and continues to entertain a new generation.  It is routinely considered one of the greatest films of all time.

The Man Who Knew Too Much (1956) – The most underrated of their four collaborations, this is actually a very entertaining and suspenseful movie.  It also did quite well at the box office.

Vertigo (1958) – A dense, psychologically complex work, which features brilliant performances by James Stewart and Kim Novak.  This film bombed upon its release, and received little critical acclaim.  It was decades after its release when the true power of this film began to be appreciated.  An absolute, undisputed classic.

So on the 104th anniversary of Jimmy Stewart’s birth, I’d like to say thank you for all the incredible, memorable performances Jimmy.  And for your service to your country.

Here is a clip of Jimmy Stewart honoring Alfred Hitchcock, when he recieved his AFI Lifetime Achievement Award in 1979.

In the late 1980’s, five of Hitchcock’s movies (including all four Jimmy Stewart collaborations) were re-released to theaters.  Here is the re-release trailer, narrated by Stewart. (Universal Pictures owns the rights to all of these film titles.)