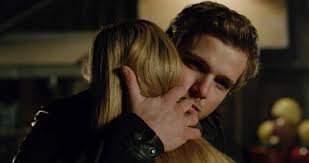 So last week’s episode ended with what has to be the creepiest, most shocking, what-the-hell moment yet in this series.  It was quite a present that Jake Abernathy left for Norma.   Deputy Shelby is such a cad,  he just can’t keep out of Norma’s bed, even post-autopsy.  That seemed to set this week’s episode up for some incredible tension, right?  The season finale is only one week away.  Instead, this episode kind of fizzled.

Norman has some further interaction with his English teacher, Miss Watson, played by Keegan Connor Tracy.   Miss Watson has popped up in a couple of previous episodes,  and she’s always trying to nurture Norman, to encourage him to step out.  There is something a bit awkward and off-putting in the way she looks and speaks to Norman.  It’s unclear whether the show’s writers are setting up something with this student/teacher relationship; if they are not, then it is really wasted screen time.

Dylan befriends Bradley, and even risks his job to help her out.  It’s pretty clear that there is mutual attraction between the two, and the implications of a Dylan/Bradley hook-up could not be good for anyone’s sake.    Emma eats a pot-laced cupcake, which was a cute moment, but a moment that seemed to exist only to provide a little comic relief. 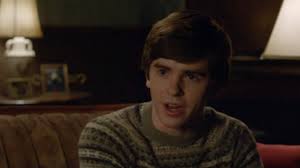 Best line in this episode:  Norma asking the question “Why do crazy people keep gravitating towards me?”

Creepy mother/son moment:  Norma asks Norman if she can sleep in his room.  He offers to sleep on the floor, but mother is having none of that…she climbs right in bed with Norman.  Right into his small twin bed, the two of them snuggled up close.   It could almost be a sweet moment, were it any other mother and son.

Jere Burns’ evil character Jake Abernathy makes an appearance at the end that seems almost obligatory.  Really, as surprising as the last episode’s ending was, this one was equally predictable.   In a show that has been consistently strong, this is one of the weaker episodes to appear up to this point.    Fans will expect much more than this for the season finale, and I’m confident the show will deliver.